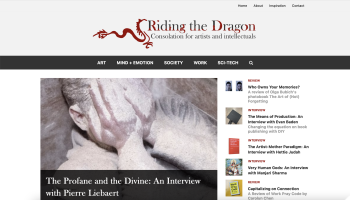 Riding the Dragon is a platform that I launched in February 2017 to give space to the difficulty of the experience of creation. It is a website featuring thought-provoking essays and interviews with creators.

About Riding the Dragon

To live a life in pursuit of creating something entirely new — and what’s more, something that nobody has specifically asked you to create — is to live a life that binds itself with uncertainty and risk. While the “creative genius” is put onto a pedestal by contemporary pop culture, that vision somehow finds a way of romanticizing or even embracing the distressed emotional states that, when lived in the first person, are far from glamorous.

The reality is that the ability to produce truly new work is not akin to drawing ideas up from a bottomless well of bliss, but rather, is more like birthing occasional coherence from a maelstrom of many complex and confusing experiences.

Most of the artists and intellectuals who I know, myself included, struggle to understand themselves, their work, and their relationship with their work. They have bound themselves up with an untamed beast, who sometimes gets the better of them. Their ideas can grow beyond their capabilities, their talents can become unwieldy, their intelligence turns itself against them. This fact is typically a source of further angst, anxiety, depression or self-doubt.

Yet, the impetus to produce something new cannot be broken in like a house pet.

Over time, I’ve come to think of this act of mastering (or even just surviving) the creative process as “riding the dragon.” The mind grows quickly, sometimes beyond the body’s control. The spirit can have urges that do not fit inside the smallness of our biology. To realize our own potential, we cannot kill the dragon, nor do we want to tame it. The beast must be allowed to live according to its nature. To harness its potential without getting ourselves killed, we must learn, with respect and strength, to ride the dragon.

Visit the platform to learn more: Riding the Dragon: Consolation for Artists and Intellectuals 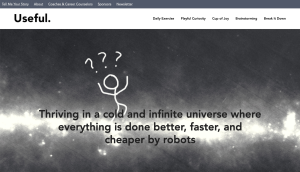 Useful. is a project centered on the relationship between people and work. It’s a collection of activity sheets to get you thinking about your purpose and value outside of traditional ideas of work. It’s meant to be light and fun; each one is just a single piece of paper that you can print and play with. And best of all, it’s free.
© 2000-2023 Katherine Oktober Matthews
Reproduction of content without prior written consent is prohibited
Back To Top