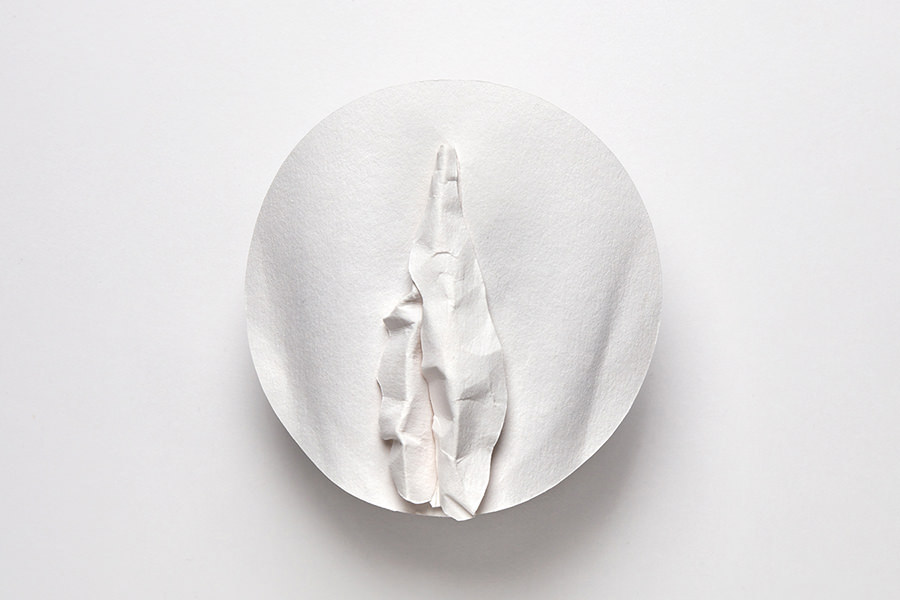 Artist Mandy Smith creates her exceptional works using an everyday material: paper. Shaping paper into various experiences from sculpture to stop-motion films, Smith and her studio have sent a paper rocket into the stratosphere, created an interactive, life-size paper-based guillotine, and most recently, made more than 100 white paper vaginas to raise awareness of female genital mutilation. She’ll be speaking on the TEDxAmsterdam stage on November 18th about the art of paper.

How did you start with paper-based art?

My background was in advertising, as a creative. I moved over to Amsterdam to work at an advertising agency, but this was just before the recession hit, and I soon found that there wasn’t really any work to do there – briefs just stopped coming. So, I had spare time, along with a lot of other people, and I ended up just working with paper to fill my spare time.

I used to do it as a hobby, but I hadn’t really picked up a scalpel and paper in years, and I guess I missed doing things with my hands. Then I got a job at another ad agency and they took an interest in what I was doing on the side, and were encouraging of the fact that maybe I could make a living out of it, because I was quite passionate about it. So I left advertising and got a job at a bar, and funded a short film to then try to meet production companies. From there, things have just kept growing and growing, really. I’ve been doing it full-time now for about seven years.

Your latest project “No More Cutting” is aimed to raise awareness of female genital mutilation by crafting paper vaginas, but this is actually a personal project rather than an assignment, right? How did that develop?

It was always something that I was interested in as a topic after I stumbled upon it quite accidentally when I was studying at university. I was making a plate which you could put in a microwave and it would stay cold on the outside and just heat up on the inside, and the head of ceramics at my university told me about Functionally Graded Material, or FGM. So when I was googling “FGM” to get more research on this kind of gradient ceramics, instead I saw results for Female Genital Mutilation, and this whole other world of this really dark topic opened up and it took me aback quite a bit, because I was looking for something else entirely.

It’s been about ten years since then and I always wanted to do something about it, but this project kind of came about while I was working on something else. I was making nearly a thousand paper roses for another project, and sometimes when I’m working on something quite monotonous, I watch videos just to keep me from not going insane. The Guardian was playing videos trying to shed light on genital mutilation, and while I was making all these roses, I thought, “Aw, they kind of do look like little vaginas!”

One thing led to another, but I realized that because both paper and flowers are quite delicate, maybe using paper is a good way to illustrate the mutilation and also to try to spread awareness of the subject without being too in-your-face or aggressive. It could be a quite gentle, observational way that may shock people but it wouldn’t put them off from sharing it or talking about it, since the point of the project is to open up conversations and open up taboos with people.

Do you model them after real-life or specific vaginas?

They’re all modelled from real images. I’ve now got 113 of them since the project started. On the website for the project, nomorecutting.com, there’s a place where people can submit their images. Women have been emailing me personally and I’ve been opening up conversations with people. It’s quite an intimate and personal thing to ask somebody, so I always want to be open as an artist to speak to people.

How do you choose the right paper for the project?

I wanted to have something malleable and soft, something that I could crumple up and it would hold a form. It couldn’t be too thin that it wouldn’t hold its structure, but it wasn’t too thick that I couldn’t create and sculpt with it.

When I display them, I don’t want them to have a lifespan of a quick picture. I want them to last, so they need to hold their shape with the glue and everything. It’s the paper stock that I work with the most because it’s strong while still being thin enough to look really delicate.

Do you feel any intimidation by a blank piece of paper?

I guess with any creative person, you’ve always got this bombardment of insecurity when you’re analyzing your own work. So there’s always some sort of insecurity with it, but that’s what pushes you to your next project because you’ve never really solved the use of the blank piece of paper. You always think there could be something else that you could do. It’s interesting that it could lead to so many different things, whilst looking so ordinary at the very beginning.

Is there anything you wish that more people knew about paper?

The more I talk to people about it, and the more I show projects, the more people see how much you can do with this material. I love surprising people by making them see bigger than what they think something is. That’s what I find quite interesting in particular: people’s relationship with the everyday or with something that they think they know. That’s also when you can surprise somebody with a new answer or a new solution, and then that might inspire them to use some other material or inspire them to think something different about something else that they think they know.

This interview with Mandy Smith was published with TEDxAmsterdam. We talk about her paper-based artworks.