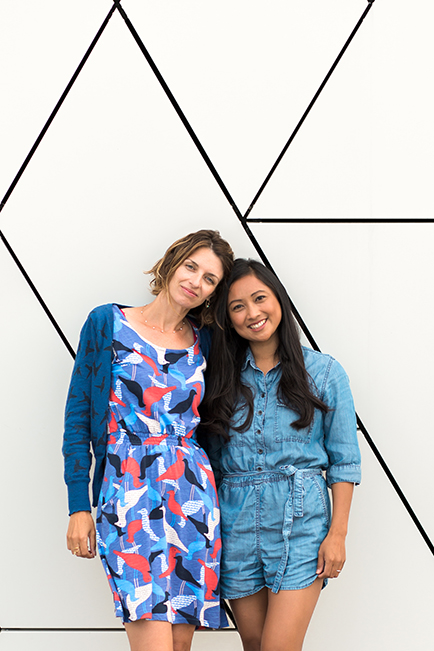 Happiness is something that every parent, regardless of country or culture, wishes for their children. As it turns out, the Dutch may be onto something: according to UNICEF studies of child well-being in 2007 and 2013, Dutch children are the happiest kids in the world. But why? In their book ‘The Happiest Kids in the World’, American writer Rina May Acosta and British writer Michele Hutchison – both married to Dutchmen and raising their kids in the Netherlands – break down the Dutch approach to parenting. They’ll be joining us at the John Adams for a discussion on September 18.

How did your book ‘The Happiest Kids in the World’ get started?

The book is a collaboration between me and Michele Hutchison, a British writer and translator. The idea actually came from our English publisher, who stumbled upon my blog post, The 8 Secrets of Dutch Kids, the Happiest Kids in the World. Michele and I both live in The Netherlands, and are both married to Dutch men and raising our kids here, but my own personal story is that I was just a normal mom living in a Dutch village and feeling really socially isolated. I wanted to share my own experience of what parenting in a Dutch village was like. So, quite out of the blue, I decided to join the mommysphere and have my own say in what’s going on in this country.

And what is going on in this country?

You’d think parenting in Holland is not that much different from the U.S., considering they’re both modern, Western cultures, but I realized pretty quickly it was a completely different world, in terms of what was going on in my Dutch village versus what I would experience in the San Francisco Bay Area. A lot of the things that my peers in the U.S. were being pressurized about – like early academic performance – wasn’t even an afterthought here. There was no race to see how early your child can read and write. No pushing the child to know the alphabet. There was no talk of that, and I found that to be a complete relief.

The emphasis for preschoolers is to play and get along with each other. They focus on social skills first – the social-emotional well-being of a child. They won’t formally learn the ABCs and arithmetic until they’re in grade three, which is six years old.

And what was so amazing is that the kids are happier here. No matter where you are in the world, isn’t that what we all want? The Dutch are accomplishing this, and nobody seems to be making a big fuss about it. There’s so much hoopla made about different parenting styles, like French parenting, with Pamela Druckerman’s book Bringing Up Bébé, and of course Amy Chua’s book Battle Hymn of the Tiger Mother, but nothing about Dutch parenting, which seems to have achieved what we’re all looking for.

The ‘right’ way to parent and educate children is a hot button. How do you even begin to approach it?

That’s the magic of the Dutch way: there is no ‘right’ way. It’s more about common sense, about going back to the parenting basics, and really just trusting your intuition to become more forgiving and accepting. There are all these ideas about how can we make children kinder and happier, but it’s a goal-oriented approach to parenting. It seems that, in the modern world, there has to be an end goal. Whereas, in Holland, it seems they’re just letting children be children. School is supposed to be a place to learn, not a place to compete and get the highest scores. It’s a place to let a child discover who they are, what their strengths and weaknesses are.

How did you measure happiness?

We based our book on the five dimensions that UNICEF uses to measure well-being: material well-being, health and safety, education, behaviors and risks, and housing and environment.

Another component is a subjective evaluation of children: how they feel about their relationship with their fathers, their mothers and their peers. What’s fascinating is that the Dutch were overwhelmingly rated as having a positive relationship with all three – their dads, their moms and their peers. No other country replicated that to that degree. Researchers and psychologists often believe that it’s these relationships that reflect a child’s happiness.

How did you deconstruct how Dutch parenting works?

We wanted to base our book on research, but also make it a more personal story. We not only spoke with the researchers involved in this study, but also to Dutch parents, Dutch children, Dutch pediatricians, and Dutch teachers, and we of course included our own personal experiences. We took what the research said and then tried to get an overall view of what people are actually experiencing.

What surprised you most in your research?

A whole lot! I realized just how off my own personal ideas were about how to give my child an upper edge. It took writing this book for me to realize that I really should just let my four-year-old be. It’s going to be ok, I don’t have to push him to read.

Another thing that’s incredible to me, is there’s a billion-dollar sleep industry for people who aren’t sure how to get their baby to sleep through the night, but the Dutch get their babies to sleep without too much controversy. Something that unites a lot of American and British moms is that they complain about sleep deprivation, whereas Dutch parents complain to a lesser extent. The Dutch are both more pragmatic in terms of their expectations and in teaching their kids to sleep by not fussing over them as much. I find it fascinating that both Dutch parents and children get the most sleep in the world.

Did you find an explanation for that?

Simply because they have rest and regularity. American babies are being over-stimulated, again because of the push for cognitive development. There’s a billion-dollar industry for sleep, and another billion-dollar industry for educational toys, which starts literally when they’re newborns. There are nursery decorations that are supposed to help with cognitive development, and a lot of toys and gadgets catered towards these little beings from the moment they’re born. And the Dutch realized that the world itself is exciting enough.

Is this not arguing for a certain way, the ‘right’ way, to raise kids?

It’s not about perfect parenting. That’s what I want to stress. It’s more about being realistic, pragmatic parents, who see children for who they are. There is no wrong or right way to parent, but I think the most important aspect of this is knowing that the child has unconditional love. Once that child knows unconditional love, you build on that. We also want to be very clear that it’s not about giving children free reign, it’s about creating structure and age-appropriate boundaries, and as the child grows, you expand the boundaries. It’s about equipping children with essential life skills.

When it comes to happiness and the Dutch, it’s more about happiness with themselves. It’s not about comparing with other people, it’s about finding self-contentment, self-awareness, and happiness within themselves and their family. Happiness is not a rare resource for which people have to compete.

This interview was originally published with the John Adams Institute.