My latest publication is a revised and restored edition of Kellom Tomlinson’s 1735 treatise on dancing, The Art of Dancing Explain’d. For some context on the project, here you can read the Notes section of the book of my role as Editor and Publisher.

My interest in The Art of Dancing Explain’d was born naive: I liked the pictures. The writing, on the other hand, I found so entrenched with old-fashioned notions of class, gender, and formality, to say nothing of the verbose dealings of Baroque dance steps, that I nearly abandoned it. Nearly.

Dotted throughout the text are gems of intrigue, salacious accusations, obsequious flattery, and stroppy complaints dressed up in genteel language. While the vernacular and format make it difficult for modern eyes, the longer I stayed with it, the more I was rewarded for doing so.

Kellom Tomlinson’s book is not what we would nowadays call, “a labour of love,” but seems rather a burden of which the author could not rid himself sooner. His writing is impatient, constantly hedged by commentary that he has gone on for long enough and trusts he need not say anything more. While it might be argued that these asides count as conventions of formality or evidence of an oral capture of writing, his frustration seethes off the page. His Preface starts with an excuse for the great delay of his book due to difficulties and obstructions, recriminations for the sabotage of his intellectual property, as well as explanations for his mistaken identity. By Book II, he has reached sufficient need to tell us about the “great pains, trouble, and expense” he has taken in completing this book—all of which was motivated only for the public good! His bitter words spark with the injustice of being put upon, and the publication of his book affords him the opportunity to have the last word.

He name-drops one of his successful students, only to state that she stopped working with him, without further explanation. The gossip is given and withheld. His Dedication of the book to Viscountess Fauconberg is so rich with servile sycophantry that, to modern ears, it reads as obvious irony, or evidence of some entanglement with her. His overt declaration that he hopes the dedication to her will save him from “such unjust censures as malice or envy ordinarily produce,” is pure snark, a backhanded compliment spicing up a melodramatic linguistic performance of admiration.

The added signed statements, provided by witnesses, which attest to the book’s authoring by such-and-such date seemed to me at first unnecessary proclamations of pomp, adding not much more than administrative bloat. Yet, after reading a recent article by Gabriella Karl-Johnson on Tomlinson’s book and its role in Baroque dance notation, even more things clicked into place about the book as an object and its difficult path to being published. For this reason, I am so grateful that she has agreed to extend and update her article for this publication, which you can read [in the book] as the Foreword. 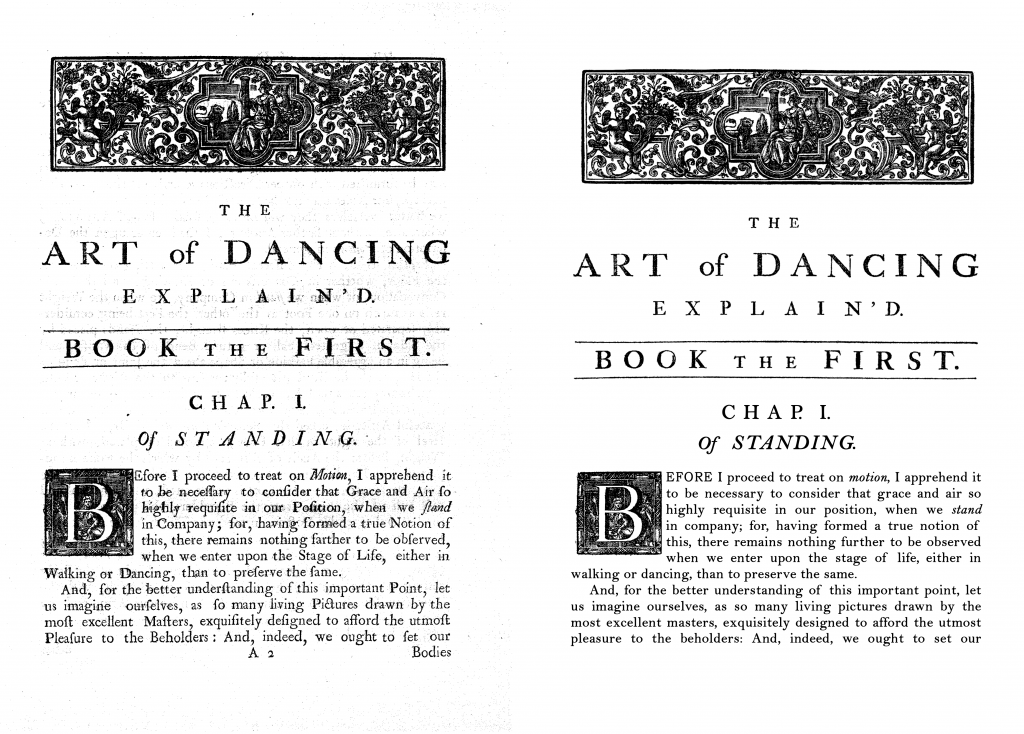 This brings you some context on my decisions as an editor. While there are many facsimile editions of Kellom Tomlinson’s book now available online, I wanted to remove some of the barriers to its accessibility and easy reading. For this edition, I’ve entirely re-typeset the text, so it’s clearer than the original’s scanned pages, which bear much distortion and noise. The transcripted text itself also provides some hurdles in the form of archaic spelling and the use of the long-s character ( ſ ). I’ve modernized these because, though a sharp reader can parse the writing in its original form, it does require parsing, which makes reading slower and more tiresome.

I decided to preserve intact the authorial content, and to edit only typesetting choices, and spelling or grammar idiosyncrasies that are now obsolete, such as the convention of capitalizing nouns. This effort presented many delightful puzzles, such as trying to decide what to do with a seemingly haphazard system of footnote identifiers, as well as the inconsistencies in words put into small caps or italics with apparent abandon but probably occupying an internal logic, of which I have tried to make sense. When uncertain, I deferred to the original. This process, performed digitally, gave me an immense appreciation for the physical and mental effort to typeset the book in 1735.

This edition also includes the original List of Subscribers’ Names, which is fascinating as proof of an early model of subscription-based funding for an artist. Moreover, at 169 contributors, the list demonstrates that despite Tomlinson’s frustration with the book’s slow path to publication, he had an incredible amount of support. He was a crowdfunder, and a successful one at that.

It has been my goal that this edition preserves the spirit and intentions of the original, while gaining readability. It’s unclear why that became meaningful to me. I imagine, half in earnest, the ghost of Kellom Tomlinson striving in a Sisyphean bind to save his book, across the ages, once more. 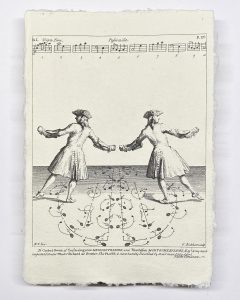 The Art of Dancing Explain’d can be ordered for print-on-demand through Lulu or the American Book Center in Amsterdam. As part of a special offering with House of Oktober, the book comes with an inkjet print of one of the restored plates on Khadi paper.

New publication: ISSP 2019
My latest publication is a whirlwind of photography-related questions produced the frenetic week of ISSP 2019.
Creative Photography Workshop in France
Join me this October for a week of photography and delectable food and wine in a nurturing environment set in the beautiful French countryside.
Recent Updates
Categories
© 2000-2021 Katherine Oktober Matthews
Reproduction of content without prior written consent is prohibited
Back To Top