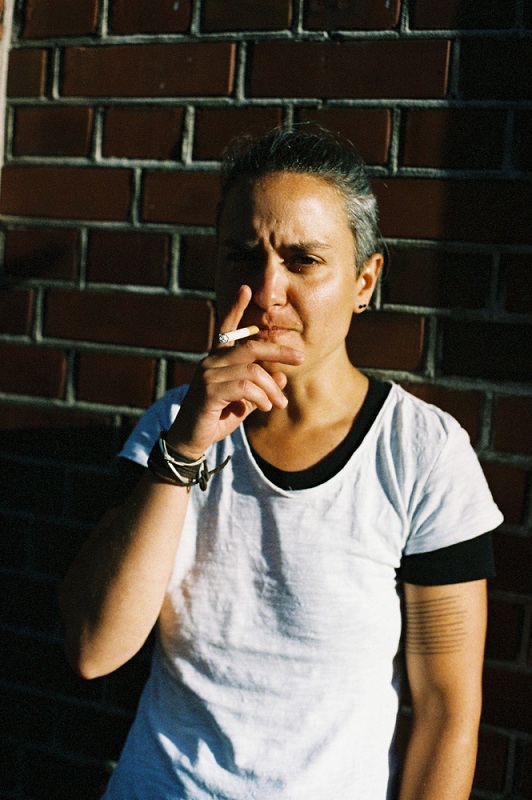 Versal is an international literary journal based in Amsterdam, featuring poetry, fiction and art, with their 11th annual issue released this year. Submissions for next year’s issue are accepted starting September 15. We talk with founder and editor-in-chief Megan M. Garr about Versal’s roots, the printed book as an object, and how she’d love you to read the journal, even if you have to steal it.

Versal is promoted as ‘the literary and arts journal out of Amsterdam’. What is it about Amsterdam that gives the journal its identity?

The journal is representative of the mentality of something that was built here in the community that was not necessarily born and raised in The Netherlands. What we’re doing and what we’re tapping into has more to do with what I call ‘translocality’, which is in-between of spaces, physical spaces and other spaces, than it has to do with representing the local Dutch or international community.

I don’t think that Versal could have happened if I had started it in my hometown Nashville or even where I went to school in Montana. I think the reason why Versal has become what it is, is because I moved out here, I started to have this really weird in-between experience of not really being American anymore, not being Dutch, and being told both things all the time: “You’re not Dutch, you’re not American, your English has gone wonky!”

That’s a consciousness that’s in the journal and in most of the editors’ heads, and it sort of underlies all the work and energy that goes into it. A lot of the people we publish are also in those in-between spaces.

Why was it important to create a print literary journal, as opposed to publishing an online journal?

With so many lit journals on the market these days, what do you think distinguishes Versal?

Probably what puts Versal in a different category has to do with how we choose work. I’m very specific about who’s on our poetry team and who’s on our fiction team, because we want to build a well-rounded team of people who are interested in different kinds of work, different kinds of traditions. No submission is thrown away just because it doesn’t match our personal aesthetic. If I get a submission that’s super conceptual and out of my cognitive league, I’ll send it to another editor who I know can read it on its own terms, to see if it’s succeeding as this kind of work.

The journal doesn’t publish work according to themes — Is there a reason for that?

We tried it once, but I really like seeing what comes to us. We do a very limited amount of solicitation, so all the work that goes into the journal is sent to us through an open call, and I love to explore that work and see the kinds of work that people are doing. I love to see the bad work as much as I love seeing the good work because it reminds me of what’s out there, and what we’re all trying to do.

There’s a lot of journals doing themes right now, and that’s fine. But, as an annual, I’m more interested in the exploration of building the journal than I am in saying let’s do something within these parameters. That goes back into how we choose work: trying to keep things open, pushing aesthetic ranges, deciding what goes in through a discussion rather than a decision on high.

The more open you keep it aesthetically, the more chance you have, theoretically at least, of representing the kind of work that’s happening at the moment.

How do brick-and-mortar bookstores figure into the scene for you? Are they giving you most of your customers?

Bookstore sales are not where literary journals are going to make a lot of money, because most of our US distributors are on consignment. If we see a check from any of them, it’s a miracle. It’s more about being on a bookshelf and picking where those bookshelves are. We’re pretty targeted with where we take it. For example, being at City Lights in San Francisco is good – they have a lot of traffic, it’s a famous bookstore, it’s connected to the arts and the literary scene. If they only have two copies and they don’t sell all year, that’s ok. Sometimes they get stolen, and that’s hilarious.

It is! It’s great. That’s part of the object of it, it should move through hands. As many hands as possible. We’re not making any money from it; we’re just trying to keep printing it. So, if it gets stolen from a bookstore here and there – fine! Someone thought it was valuable enough to steal – that’s cool!

That’s a good question. Most editors are hoping that it’s valuable enough to buy, but if it’s valuable enough to read all the way through, that matters more to me. Nobody’s fooling anybody, this isn’t commerce. This is just art, and nobody’s figured out how to make money from poetry. I’d give it away for free if I could. Not because I don’t think it’s valuable but because I don’t think it’s a part of the typical economy. I’m waiting for a moment when I walk in some random second hand store in New York and I see a copy. I’m sure they’re there somewhere.

This interview with Versal editor Megan M. Garr was published on KNiK. We talk about Versal’s roots, the printed book as an object, and how she’d love you to read the journal, even if you have to steal it. (in Dutch and English)