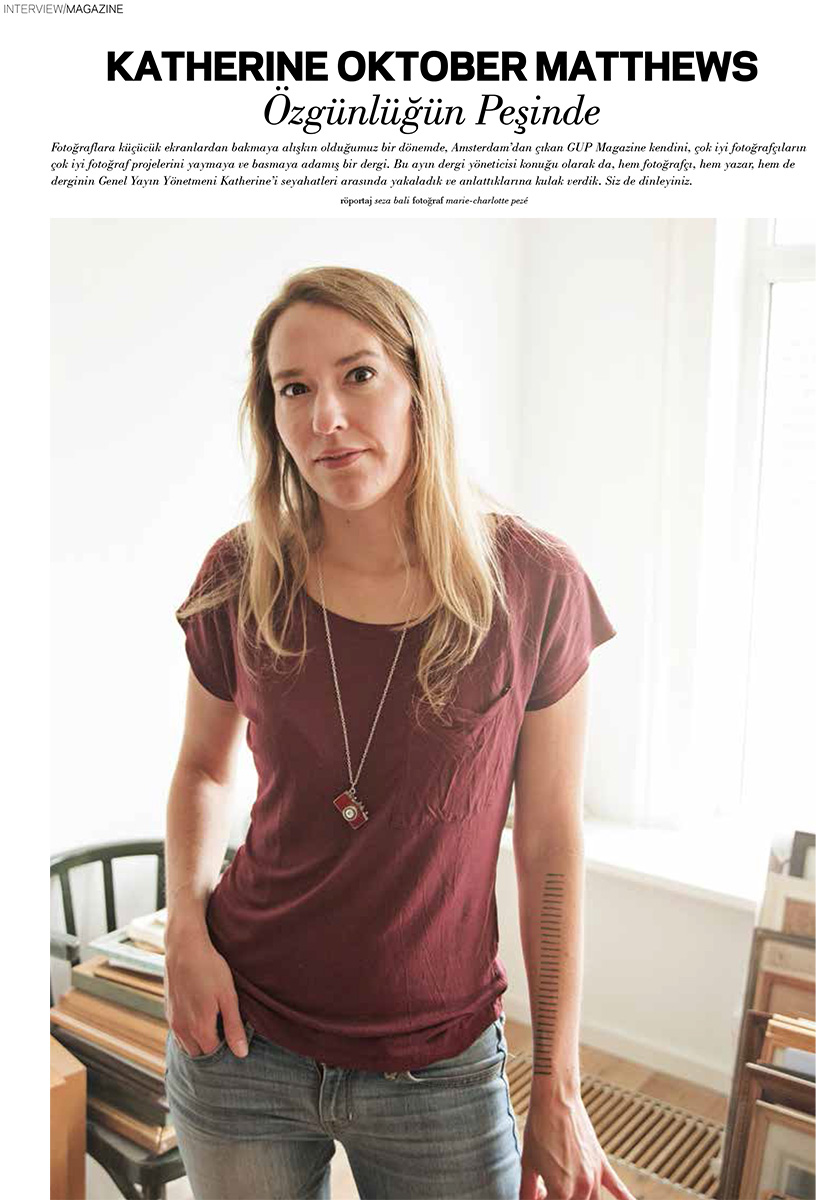 At a time when we are used to seeing photos on tiny screens, GUP Magazine from Amsterdam is a magazine devoted to spreading and printing very good photographs of very good photographers. As a guest of the magazine manager this month, we have heard from photographers, writers, and magazines that we have caught and talked with Editor-in-Chief Katherine during her travels. You listen too.

Do you ever get tired of looking at photographs?

Oh, definitely. The world we live in today is saturated with photography, so it’s there even when you don’t want to look at it. But I try to use this exhaustion to my advantage: there’s so much photography and most of it is boring, so I’ve got my eyes on the lookout for the things which don’t bore me.

Katherine, what were you doing just before our interview?

At the departure terminal of Budapest Airport, I was watching planes with a big cappuccino. I came here to visit my friend and I’m on my way back to Amsterdam. I’m in that transitory feeling of not-being-anywhere.

How did you get to Amsterdam as an American?

If you’ll allow me to be a bit ironic… I suppose I was chasing the “American Dream.”

How did you get into publishing?

It was really a matter of several of my interests arriving to a confluence. I like to write, I like imagery, I like thinking about and discussing ideas. Something which starts as a hobby can end up greatly shaping your life, or vice versa, something which seems important to you at one moment can turn out to be just a minor influence. In short, when something interests me, I follow it for a while to see where it leads.

Introduction to GUP Guide to Unique Photography. What is “unique” photography?

What is unique is defined by what has preceded it and what surrounds it. It depends on an artist having a specific message that they want to convey – a profound truth or insight derived from their essentially individual experience of being alive at this time and place – and their own original language for expressing that message.

You have a theme for each issue. How did you decide on this format?

The luxury problem of today’s photography world is that there is so much great work being produced. This obliges us to give constraints to ourselves; for example, we could also limit ourselves to work that’s related to current events, but themes have worked better for the way we think as an editorial team.

What about your next issue?

This is actually pretty exciting to talk about – GUP is celebrating its 10th anniversary this year in October, so we decided to open up our anniversary issue to submissions. We typically don’t accept submissions at all for the print issue, since we work within the themes, so it’s a great opportunity for photographers who want to see their work in print.

XOXO has 10 issues out a year and GUP has 4. How do those 3 months in between your issues go by?

In terms of the daily routine, of course we update our website constantly. Apart from that, we spend most of our time looking at photographs and following new projects. It takes a lot of work to publish photo series and articles regularly. To maintain a constant flow of interesting photo series and interesting articles about photography is a lot of work, so it doesn’t really slow down.

Tell us about a day at the office.

Everyone comes and goes according to their schedules, but basically we’re a group of writers. So, if someone walked in suddenly, they’d probably see a handful of people typing quietly at their laptops. We are not a cool office for an art opening.

How many people are in the team? How is the workload distributed?

There are six of us who are regular contributors to the team, and then we have some interns for daily support. We operate a lot like a start-up: people define their own tasks based on their ambition, interests and talents. Of course there are certain roles, for example I’m responsible for the content of the issue coming together on time, but in general, there’s a lot of freedom for choosing your own direction. We define ourselves with our collective independence and autonomy.

Who would be your ideal reader?

I’d rather not define my preferences of readers – after all, you don’t get to choose your readers, your readers choose you! Naming an ideal reader has the potential to make it seem like we’re being exclusive, and it’s absolutely not my goal to exclude anyone. We have our goals as a publication in terms of the type of work we want to show and the type of ideas and writing we want to share, but who chooses to respond to that and see value in that is wide open. Some people like to look at pictures, some people like to read articles.

GUP seems to have a soft spot for portraiture. Why is that?

Yes, a little, but people in general have a soft spot for portraiture. We are all attracted to people’s faces, enamored with looking at them. What’s so surprising about portraiture is that, no matter how many photographs exist of the human face, there still seems to be a limitless number of interesting faces and interesting ways of photographing them.

You’re also a photographer. Don’t you just want to dedicate an issue entirely to your own work?

No, not at all. It’s not even a tempting thought! My goals as an editor are totally separated from my goals as a photographer. Being an editor is a lot like being a designer: you’re successful when nobody can really see what you’ve done, when the finished product works so well that your handiwork is invisible. It’s fundamentally about letting other people’s talents shine. I think of photographing and editing as two different media of expression. As an editor for GUP, I’m interested in exploring ideas with great depth through the medium of photography.

Photography is dependent on being published, however these days more and more magazines are becoming digital. Are you worried about GUP’s future?

I’m not worried, because I suppose it all depends on your idea of success. GUP has done well because we’ve stayed small and grown slowly. The future will do what it will do, so it’s not like I’m naïve about the possibilities of everything falling apart. It’s just important to take a wider perspective and not to put ourselves in a closed box with boundaries. We have to be open to change, and approach it with a certain amount of playfulness.

Let’s talk about your online presence. Do you approach digital publishing differently?

Yes, our online platform has been going since 2010, and it definitely has a different approach than our print publication. We try to maintain a consistent language and tone between the two channels, but we take them separately. For example, some photos are so beautiful and timeless that we want to show them in print but, on the other hand, we prefer the web when we want to show a very new, award-winning project because the timing is more important. Well, it does not make much sense to show the project in four months. Whereas online, we can be a lot more responsive to what’s happening moment to moment. Some projects benefit from an interesting layout in print that we can’t really reproduce online, or a series might look great in an online slideshow but be a little lackluster in print. We try to show work on each medium that respects its strengths.

If you were on a deserted island, would you take your camera with you or your computer?