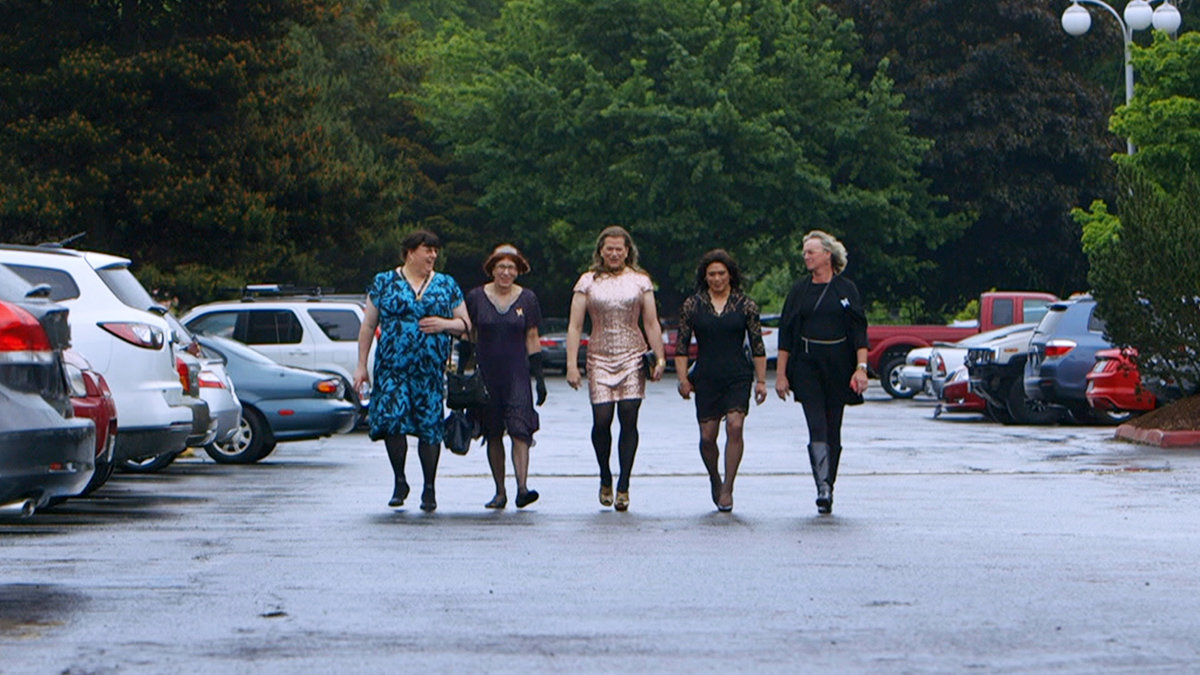 In her new short film The Convention, American photographer and filmmaker Jessica Dimmock (b. 1978) portrays the emotional whirlwind of the annual Esprit Conference, a week-long convention of transgender women mainly in their fifties, sixties and seventies. Now in its 25th year, the meeting takes place in a logging town in northern Washington, and provides space for camaraderie, education, mutual support and self-expression. Many attendees have lived their lives in the roles defined by their birth gender, and as such, are in various stages of accepting themselves, or being accepted by others, for their chosen gender identity. For most, Esprit is the one week in the year in which they’re able to inhabit their female selves. Dimmock was in Amsterdam to accept a prize for the Multimedia Contest of this year’s World Press Photo Awards, and she sat down with us to speak about the convention, the nature of an authentic self, and the world’s changing views on gender fluidity.

Tell us about the Esprit Convention and how you came upon it.

Five years ago, I went hiking in this town in northern Washington, just to take a couple of days off, and I kind of randomly picked a town on the map called Port Angelis, which sounded like a beautiful, quaint fishing village. In reality, it’s kind of this shitty logging town and I checked into this random hotel and, unbeknownst to me, there was a large congregation of 150 or so transgender women. They’re all in later life – in their fifties, sixties, seventies – and every year they gather at this place. I had just walked into the middle of it.

I was really moved by it, and so I’ve since gone back every year to look at this group of trans women who get together in a very secretive way. Most of them are still closeted, and they picked this town that’s really remote because it’s an opportunity to come out and not be seen by neighbours, friends and people they work with.

Considering how many of them are still in the closet, why do you suppose they wanted to be involved in your documentary project? Where was the balance between privacy and exposure?

This was the thing that really surprised me; there were some people who were just starting their transition and were willing to be out and be shown. There were lots of people there who were supposedly on a ‘week-long fishing trip’ or at some ‘business conference’, and their wives think that they’re off with their buddies, when in reality, they’re there at Esprit, fully expressing their female identities. The interesting thing is that most of those women who live full-time as men believe that they wouldn’t be recognized in female form, so they’re willing to be really open. They maybe don’t want to be the star character, but have been totally comfortable in showing themselves in female mode, knowing that they’re so unrecognizable.

There were a couple of people that were like, “I just cannot be seen,” but they were still supportive of the filming and the project. I would say out of 150 people, there were maybe only four of them.

It’s a really common factor in documentary projects, and over the years, I’ve come to think that the one common denominator is that people just feel validated by having an underground story brought up. I think that’s what’s going on here. There is some risk for them, but the bigger risk is that no one in the world will ever know them, and that’s more painful. So, being somewhat vulnerable and honest about who they really are, even if it comes with some risk, has become worth it for them.

Possibly it’s another step in their journey to becoming more the person they believe themselves to be?

I think so. I made a feature documentary about the same subjects, entitled The Pearl, which I co-directed with Christopher LaMarca, in which I follow four women that I’ve met at Esprit over three years, and for some of the people that we started working with were totally closeted… like, married to a wife for 40 years with 3 kids and grandchildren, and no one knew. By the end of the project, those people had started coming out, and so I think for some it was the beginning of their transition. For some, it became a bit of a mirror of how closeted they were, because in the process of filming, they would come to realize, “Oh my family doesn’t fucking know what’s going on at all.” So, I think it propelled them forward or at least gave them the chance to look at where they are on the spectrum.

I mean, everyone wants to be who they are – and these women are no different. They desperately want to come out, they just can’t; they have families and jobs and kids. So, I think it helps move it forward.

This is an excerpt. The full article can be read on GUP Magazine. You can see The Convention in full on Vimeo.