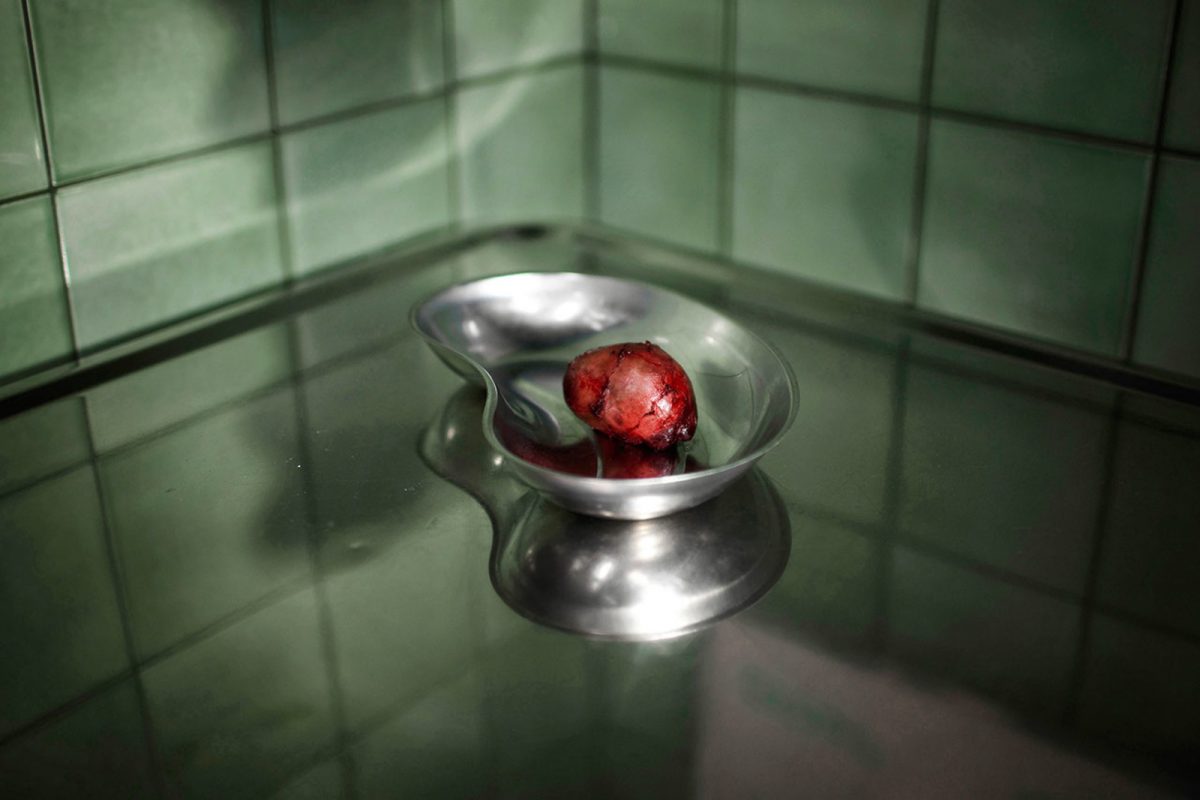 One of the most beautiful images of Maija Tammi’s series Removals is of a bright red, fleshy, bulbous goiter that’s been surgically removed from a human patient. The rest of the scene has a strange green hue, amplified against the reflective surfaces of the tiled wall, the metal surgical tray and the kidney bean shaped plate that the goiter sits on. The colours are lush, mortality is ripe.

“This is beautiful,” Surgeon B says in a dialogue that accompanies the image.

“Yes it is, extremely beautiful,” Surgeon A responds.

“It must have caused symptoms.”

There’s something not right here, do you agree? The simultaneous arousal of disgust and beauty, battling each other in your brain and gut. There’s an urge to look away, and yet also the urge to conquer the visceral reaction and look longer, unhindered by provocation.

There is no short supply of disgusting imagery in the world. In fact, our visual access to photographic disturbances has risen exponentially, to the point of our collective education and desensitization. I do not find myself drawn personally to disgust in imagery (it’s so often deployed as a simple gimmick, isn’t it?) and yet I find Tammi’s work compelling. I find the battle within, between looking towards and looking away, to be satisfying and informative. But why?

Buddhist philosophy trains us to let go of our conception of the ‘I’, because it is considered to be a delusion. The ‘I’ is not a static substance, nor is it something you can ever really point to – am ‘I’ my body that I point to? My brain? My mind? My heart?

Am ‘I’ my goiter, now removed and lying separately from me?

What is jarring to me when I look through Tammi’s images of surgically removed appendages and bodily growths is the ideological distance immediately created between the person and the biological objects of which they are composed. The bio-matter was, mere moments ago, a part of the unseen person, yet its detachment does not detract from them. An object is removed, but the continuity of the person is not at stake. By giving these removals full focus, the images prompt us to assess the composition of the ‘I’ so easily taken for granted.

But let’s not get so side-tracked by the philosophical forest that we lose sight of the practical trees: these images are disgusting. That is, they ask us to feel disgusted.

Disgust is an interesting phenomenon, a complex vortex of a physical reaction combined with an emotional judgment. There are only a few things that are considered to hold global (that is, not culturally-tied) cause for disgust, including the incest taboo and sickness. These reactions obviously developed to support the survival of our species, promoting diversity of mating and the health required to live long enough to wean our young. Sickness is innately repellent to us. As intellectual, enlightened beings, we know that there are plenty of illnesses that are not a direct threat to us, yet that does not stop us from an instinctual reactionary disgust for our own biological processes. Is it any wonder we find youth and beauty so appealing?

As interesting as disgust is, though, I don’t believe it has value in and of itself. There are many things that provoke disgust in us, which do not serve us and, in fact, teach us nothing about ourselves. The more interesting question, for me, becomes: once the initial waves of disgust recede, what feelings remain?

Tammi’s series doesn’t make me uncomfortable for some banal reason like it’s ‘unpleasant’ to look at. On the contrary, the images are beautiful. But, nor is the series showing romanticized scenes of death, the likes of which can inspire that odd obfuscation between suffering and nobility, pain and pride. Through their medical sterility and clean aesthetics, they point to a minimalism of experience, asking that we do not distract ourselves with the complications of modern existence.

We are meat. Pieces of us will fail, and we will die. That’s not a bad thing, but nor is it necessarily beautiful. It’s just life.

It would be a mistake to write off these images of removed body parts as merely reminders of our mortality – after all, as Susan Sontag stated with cynically astute blandness, “All photographs are memento mori.” They do indeed remind us of the threat of our impending and inevitable deaths, but more than that, they create discomfort because they pick away at the facade we’ve created of scientific control and existential ownership over our physicality.

Once again I think of Buddhist philosophy, as an oft-repeated line about detachment runs through my head: in this life, not even my skin is my own.

I am not comfortable looking at an image of an amputated breast, or a removed cancer. But what I am aware of, what I find pleasure in, is the process of transformation. If you sit with the discomfort long enough, it can transform with effort into something else. For example, ecstasy. For example, liberation. For me, what my body brews when percolating over these particular images long enough is transcendence of self. When we let go of our preoccupations with the physical aspect of self and the body’s implicit limitations, we’re enabled to engage with the parts of existence that extend beyond ourselves, beyond boundaries. Acceptance is a revelation.

The joyousness of a flesh-based experience is sensual divinity, something spirits can only dream of. But expecting that these experiences should be exclusively pleasurable, without expiration, is an egocentric entitlement. That doesn’t mean it’s an inaccurate desire – it was after all created by our mind, itself a limitless thing. Of course our mind doesn’t understand the limits of our body. As we toggle between our finite and infinite natures, we grapple with our perceived imperfections. We grapple too with disgust, a reaction formed to keep our bodies safe.

When one is attempting to combine beauty and pain together in one package, the road is fraught. One is inclined to make a fetish out of suffering, or take a shortcut to poetry by capitalizing on archetypical views of peak humanity. Some are motivated to argue that because they look at suffering, they look at something ‘real’ or ‘truthful’. These perspectives are themselves delusions, though, which gain power only according to the faith that you offer to them. The truth is, pain isn’t pretty – it isn’t anything. We experience pain as part of our processing of sensory information, or in the case of observing someone else’s suffering, we experience a simulation based on sympathy through mirror neurons. Conflating that experience with beauty doesn’t add profundity, it just triggers the cognitive dissonance so readily observed within poetics. If it stops there, it’s a gimmick, nothing more.

Whether we intend to or not, we give value to something by giving it our attention. In this way, I have no desire to spend my attention on photographs of glorifications of rage or violence, impotently observed poverty and subjects of pity, photographed piteously. What I do find worthy of attention is Tammi’s use of disgust to arrive at something beyond itself. Removals engages with the disgust we encounter regarding our own bodies and, rather than leaving us there, thoughtfully takes one more step to ask us to transcend that disgust. Or, even if we cannot transcend it, at least sit with it for a while, and see what comes next.