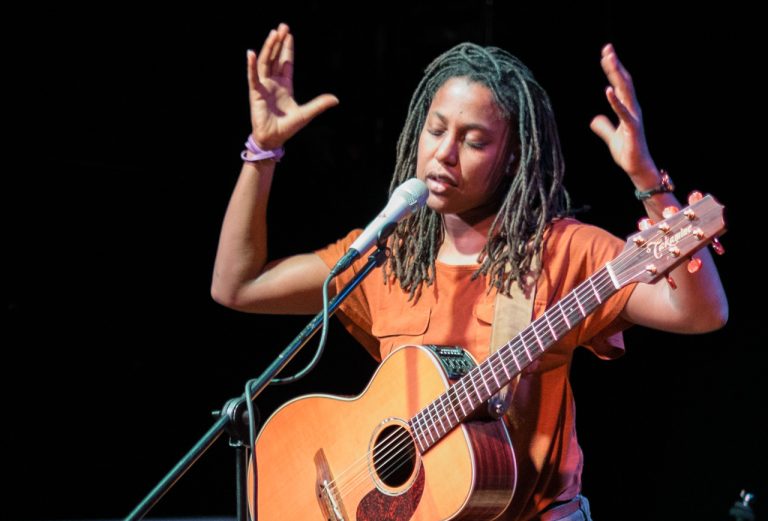 “Art is a deep love of humanity,” musician Lake Montgomery tells me wistfully as we hang up. She’s a singer/songwriter born in Paris, Texas, but has been living in various countries in Europe for the last eleven years. She’s now based in Edinburgh, but we first met when she lived in Amsterdam, and have since spoken many times about the practice of art. While she performs frequently and broadly, she maintains a career that is, to her fans’ bewilderment, essentially under-the-radar, preferring the intimacy of shared spaces to the remoteness of wide reach. In this extensive interview she speaks about the shame of busking, the confidence of asking for what you’re worth, being a useful part of society and committing to your craft.

You’ve been playing music for a long time, but you told me that you couldn’t or didn’t really perform in public until you came to live in Amsterdam. How did that you evolve? What was stopping you before, and what allowed you to get started in Amsterdam?

I did perform, but only casually, like at the end of a party when I was drunk enough and someone would say “Hey, she plays guitar!” then I’d play a song. Things like that started to get me thinking, “Hey, I could do that.” I’d travel a lot throughout the states, and it was a great way to make friends. I’d sit in on open mic nights and end up with a good handful or crowd of people liking me. It helped with my shyness, and that was the main thing stopping me.

In the States, it seemed to me at the time – or maybe it was just what I was exposed to – that you couldn’t want to be just a singer/songwriter. If you wanted to call yourself a musician, you have to aspire – your goal should be getting on MTV or on television somehow, making a million bucks, being a superstar.  But being a fuckin’ superstar was never very interesting to me. It didn’t seem very earthy, you know… real.

Again, maybe it was my youth that I saw things that way. I don’t know if it was the culture, I’d still like to say it was America and not necessarily me.

Then, when I went to the Netherlands, a couple things happened. I was away from my home, and I think that had a big effect on me. I didn’t know the Netherlands was going to be my home for six years. I was welcomed there by a Dutch woman named Ans who loved music and musicians, so she was getting me into it, too, you know? I could see that there are people who can have just a normal life, being an artist. I was witnessing that. Ans encouraged me to play music on the streets, so I went ahead and did that.

Not only is it interesting for me to connect to people anyway, but there’s something especially beautiful to connect to people who I have so little in common with. Like I’m speaking to aliens. And that was my way to say hello to the city, to connect with its people, and to feel suddenly, but deeply, a part of it. I became a part of the cogs of the community.

And they’ve got it going on in Amsterdam. I got into the open mic nights there and would immediately get booked for something else. They have little festivals, and these cultural events are subsidized, and they have culture centers that are happy to help.

It was just such a different experience than I had in the States, though I have to admit that I didn’t try there. It starts with the confidence. In the States, I was just like, “I know I’m not good enough to be a rock star,” and in the Netherlands, I felt like, “I can be who I am here, at this level. I have something to give.” That’s another thing, I lived in New Orleans before I moved to the Netherlands and I was totally happy and satisfied to be a spectator of this amazing music. I felt like I didn’t have anything to offer that. But when I got to Amsterdam, I saw people kind of playing around, and singing in English and struggling with the American accent sometimes, and I felt like I could add to that. And then, I just kept getting gigs and encouragement.

This is an excerpt. The full interview with Lake Montgomery can be read on Riding the Dragon. We talk about the shame of busking, the confidence of asking for what you’re worth, being a useful part of society and committing to your craft.