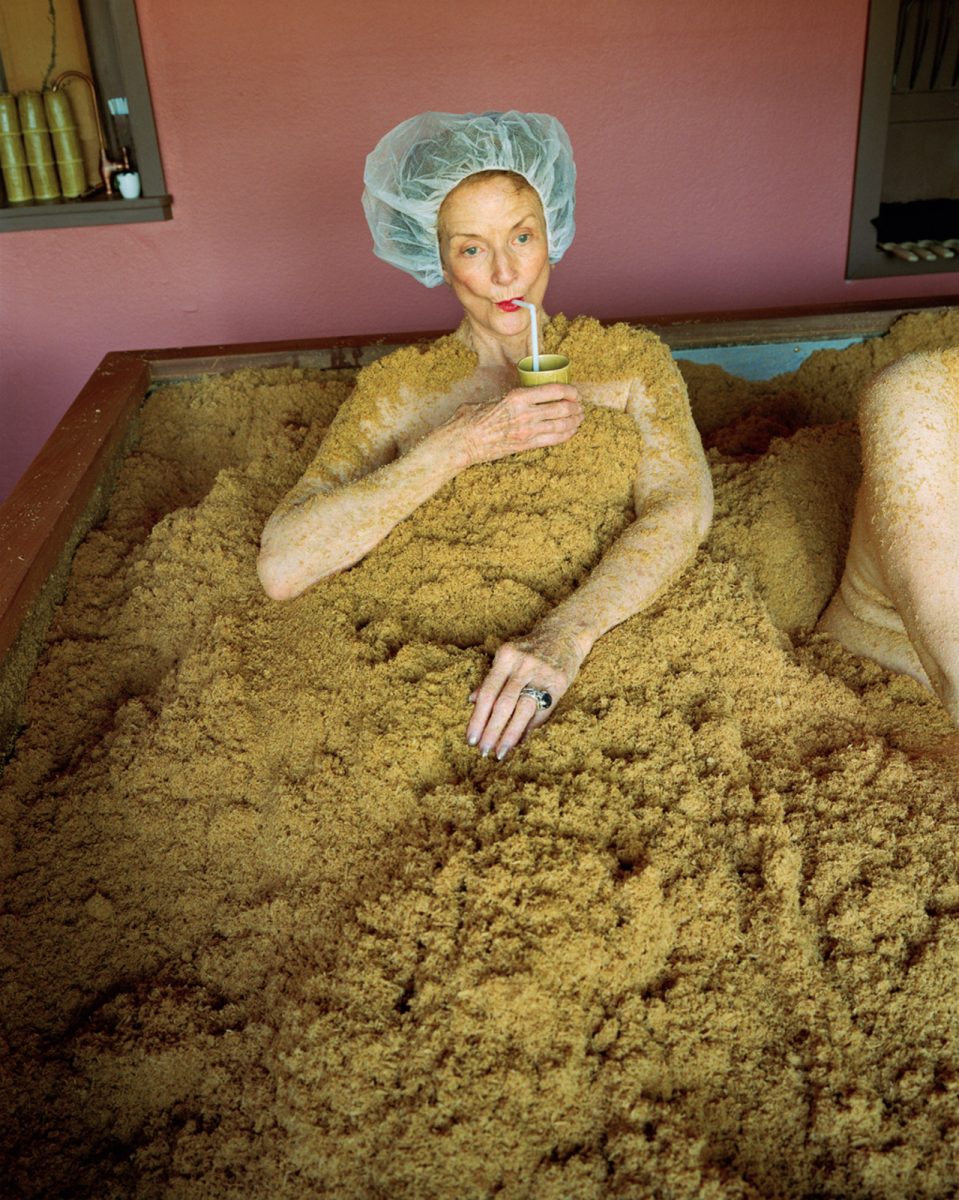 American photographer Sage Sohier (b. 1954) has been photographing people in their environments for more than thirty years, but for her new book, Witness to Beauty, she turns the camera onto her own life. Sohier’s mother is a glamourous former fashion model, photographed by such icons as Irving Penn and Richard Avedon. As Sohier grew up in the shadow of such a remarkable beauty, she found her preferred place behind the camera, taking pictures of her mother and home life in a documentary style – though not without a sense of humour. Yet, the artist is never far from view, embedded in her mother’s world.

You describe yourself as a “witness”, as though you are an outsider to the realm of your mother’s beauty, but you also place yourself in the images. How do you see your own role in this series?

I see myself as a ‘foil’ or secondary character. I put myself in the pictures to provide a contrast––to show how amazingly different my mother is from most people––and also to show something about generational differences and mother/daughter relationships. About halfway through the book, people can no longer tell who is the mother and who are the daughters, because my mother has had cosmetic surgeries, while my sister and I have not, and often look older than she does.

What do you think this comparison informs us about beauty?

I think that beauty is not just a gift, but an achievement––it takes a lot of work to maintain how one looks. My mother feels that she was given a gift and she wants to look her best at all times—it is an important part of her identity. I grew up in the 1960s, during the Women’s Liberation movement, when young women were giving up make-up and discarding their bras. Even if I had been as naturally beautiful as my mother, I imagine that I would have worn my beauty more casually, and in a different way.

Your book also features tearsheets from your mother’s days as a model. How do you see the woman in those pictures as compared to the woman that you know?

Fashion photographs idealise perfection or glamour. I saw my mother as glamorous, but I also saw her vulnerability and her insecurities in addition to her other strengths. There are many sides of her that aren’t explored in my photographs—her beautiful soprano voice, her deep love of the natural world and animals, her passionate involvement in a variety of political and environmental causes.

What effect do you think beauty has on those around it?

My mother embraced her beauty and made the most of it. But I think that, for many women, beauty can be a kind of prison. Some women end up resenting being seen by men as beautiful, because they feel that their other qualities are devalued or not recognised. It’s easier not to be so beautiful, to be able to move through life a bit under the radar, and to be able to focus on what you feel really matters, rather than have to deal with the distraction of other people’s intense focus on your appearance. Because of her abilities, my mother has been able both to enjoy her beauty and to focus on issues that concern her.

How do you think she has changed over the years, from then till now?

Over time I think that she has become something of a feminist. She is easily outraged by how women are treated throughout the world, and has become outspoken in ways that she might not have been in her youth.

Also, because we have had the luck to survive this long and grow older together, she sees and admires me and my sister for who we are, and has given up trying to change us to be more like her (and of course, at our advanced ages it would be hopeless anyway!).

As ‘witness’, what did you learn about the way that beauty ages?

In my mother’s case, exceptionally well! She is a walking advertisement for cosmetic surgery. But, much more importantly, she has taken good care of herself physically and emotionally. She keeps busy, exercises, maintains many warm and meaningful friendships, and throws herself into life. Her resilience is amazing. So, there is beauty that comes from the inside as well as a lovely exterior.

There are several images making use of literal mirrors, or sometimes the suggestion of a mirror in terms of you or your sister as you duplicate your mother’s stance or expression. Do you think it’s inevitable for a woman to see herself through her mother (or her children)?

Yes, I think it’s inevitable for a child or teenager to see herself through her mother—both in her and in contrast to her. Of course, in this series I’m playing with that notion and exaggerating it a bit.

You write in the book’s introduction that as you grew older, “there was no use competing with her”, and so you assigned yourself quite happily as her photographer. How significant do you think her role was, in your decision to become a photographer?

I have come to realise that she is probably a large part of the reason I became a photographer. Who knows why we choose the roles we do in life? I think that we choose not only the roles that suit us, but also the ones that are available to us. Both my mother and my father are, in different ways, larger-than-life characters. They were intriguing to observe, and I felt more at ease in the role of looking. Once I discovered photography, I realised that ‘looking’ can be very powerful in its own way.

This interview was published in GUP#52, the Mirror issue, and later online with GUP Magazine.